The Big Payback will be celebrating their 5-year anniversary with a star-studded reunion show at The Frequency, where they played their very first gig. 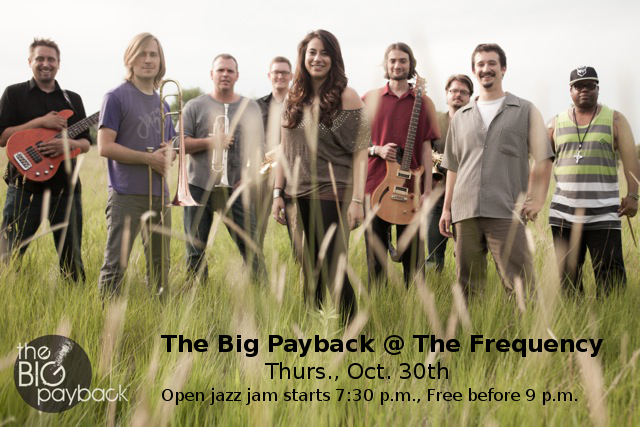 Yes, it all started in the summer of 2009. In a basement, just like every good band story.

Before we pulled out our instruments, the core of the band got together to discuss our plans. Everyone had played with at least one other person in the group, but we hadn't all played together. Most of us were jazz and classical musicians who had a craving to play original music and do things our own way. We had all played covers by our favorite horn bands, and now we were ready to find our own collective voice.

A list of common objectives was made. Our live shows would be energetic and fast-paced. The horns would not be background instruments, but would feature prominently in the arrangements. We would focus on original material. The covers we did sprinkle into a set might be by famous artists, but they would be b-sides or rarely heard songs. And every sound heard at a Big Payback show would be performed live onstage. No samples or backing tracks!

The first song that felt like a song was "Lookin' at Me." The music and initial lyrics were brought in by Jamie. We jammed on the ideas, fleshed out the arrangement, and Leah completed the lyrics. "Always" and "Overture" came about in a similar fashion. Seeds of ideas took sprout, and a full set of solid music started coming into focus little by little.

The name of the band was also Jamie's idea. We like to think of the band as our own "big payback" - a place where we can write original music, connect with the Madison community, and encourage young music students in high schools and colleges all over Wisconsin to continue to follow their passions. And yes, the name is also of course a reference to the great James Brown.

The first gig was in October 2009 at the Frequency, opening for Stukenberg. We played about an hour of music, but all the adrenaline made it feel like 5 minutes. We were absolutely thrilled!

And we're thrilled to be returning to the Frequency five years later on October 30!

We hope you can come help us celebrate!
TBP