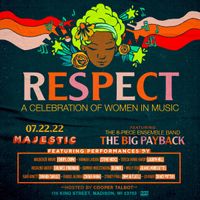 RESPECT: A Celebration of Women in Music

Follow women’s musical journey through the decades from Stevie Nicks to Adele, Chaka Khan to Grace Potter, and everything in between. The event will be hosted by sensational 8-piece ensemble band, The Big Payback, with performances by an all-female ensemble in a revue-style format comprised of artists and members of local bands. This event is an opportunity to come together as a community and show support not only for our local female musicians, honor those who have made an impact in the music industry, but also to shine a spotlight on women’s rights. Come raise your voices with us and sing along to some of your favorite songs of the last six decades written and performed by women.

FEATURING The Big Payback and: